... In 2018, Trier celebrated the 200th birthday of Karl Marx, it's most famous inhabitant... on this occasion, China donated a statue honouring the spiritual father of communism... it depicts a thoughtful but towering Marx, who stands tall at over 5 m and weighs 2.3 tons including the sculpture’s base, holding a book in one hand... the 19thC thinker spent the first 17 years of his life in Trier near the Luxembourg border... but a lot of discussions took place before the Karl Marx statue was finally accepted as a present and this controversial statue did not arrive without criticism... Thanks Dustin! ¯\_(ツ)_/¯ 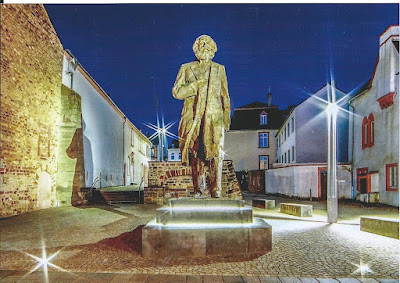 Karl Heinrich Marx (1818 – 1883) was a German philosopher, economist, historian, sociologist, political theorist, journalist, critic of political economy, and socialist revolutionary.
He is most famously known for his economic and social theory which gave rise to Socialism and Communism. Marx's critical theories about society, economics, and politics, collectively understood as Marxism, hold that human societies develop through class conflict.
His two most well-known works are the 1848 pamphlet “The Communist Manifesto” which he wrote with his co-author and friend, Frederick Engels and the three-volume “Das Kapital”.